In this introduction to geometry lesson, we'll go over some of the most basic objects that are used: points, lines, line segments, rays, and angles.  It's important to understand these geometry terms, because they're the building blocks that are used to create all sorts of other geometric shapes!

We'll start with the simplest object in geometry: a point.

What is a Point?

A point is a location and is represented by a dot (a small circle).  We use a capital letter to name a dot.  Points do not have a size, we only use them to show position.

​We say that points have no dimensions, or zero dimensions.  This means they do not have a length, width, or height.  They simply mark a location.

What is a Line?

You probably already know what a straight line is and could draw a picture of one.  It's a little trickier to describe or define a line in words.  One way to describe a line is to say that a line is formed by an infinite number of points connected in a straight path that extend infinitely far in opposite directions.  We put arrows on both ends of a line to show that the points continue forever in both directions.
​
Line have only one dimension: length.  A line does not have any width or height.

There are two different ways to name a line.  You can either use one lowercase letter, like m in the example below.  The other way to name a line is to choose two points on the line and draw the line symbol ​↔ above them.  When you write the two points, you can write them in either order.  In the example below you could write AB with the line above, or BA with a line above would also be acceptable.  It's typical though to write the letters in alphabetical order. 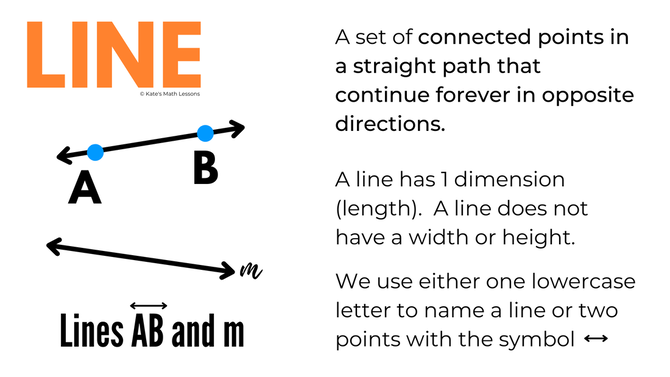 The first two types of lines that you should be familiar with are horizontal and vertical lines. 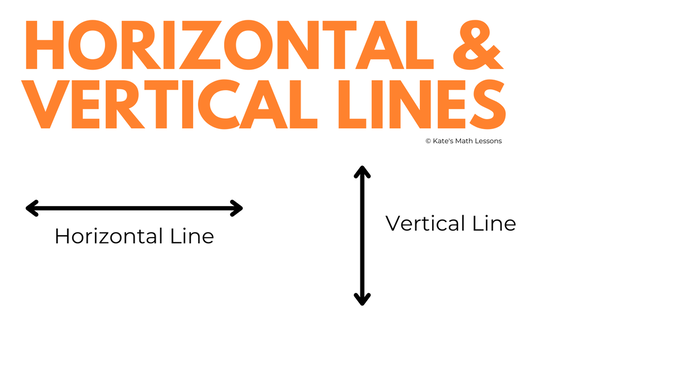 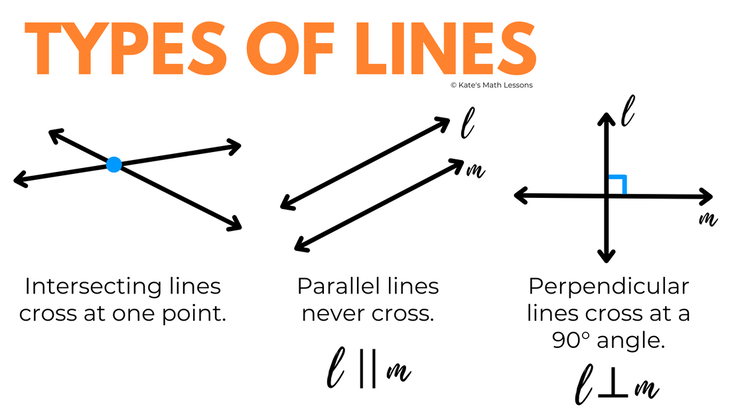 What is a Line Segment?

A line segment is the part of a line that connects two points.  It's essentially a section of a line that has a beginning and an end.  A line continues on forever in both directions, but a line segment starts at one point and ends at a second point.

The two points that mark the ends of a line segment are called endpoints. 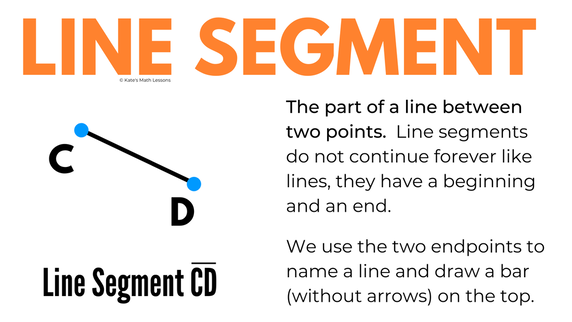 Length or Measure of a Line Segment

You can use a ruler to find the length of a line segment and give your answer in cm, inches, etc.  If your line segment is drawn on a coordinate plane, you'll figure out the distance in units between the two endpoints.  You can do this by counting spaces if it's a horizontal or vertical line segment.  If it's at an angle, you'll need to use the Pythagorean Theorem to find the length.

When you see the two endpoints written next to each other without a bar or line written above the letters, this indicates it's the length, or measure, of the line segment.  Again, you can write the two letters in any order but it's typical to write the letters in alphabetical order. 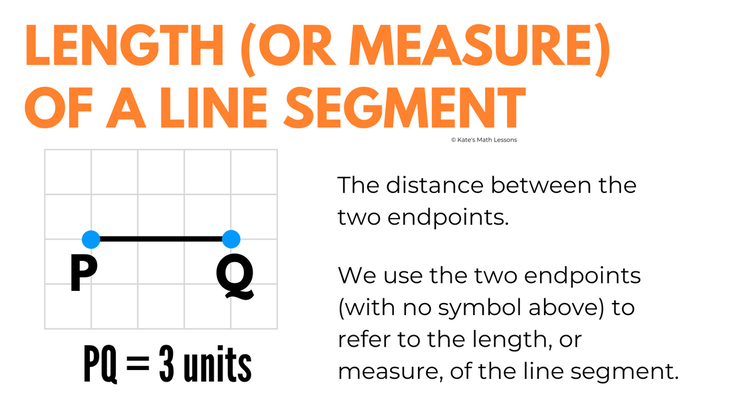 What is a Ray?

A ray is similar to a line segment because it's also part of a line.  In geometry, a ray is a part of a line that has a starting point but no endpoint.  It starts at one point and continues on forever in only one direction.

You cannot measure the length of a ray because it continues on infinitely with no end in one direction. 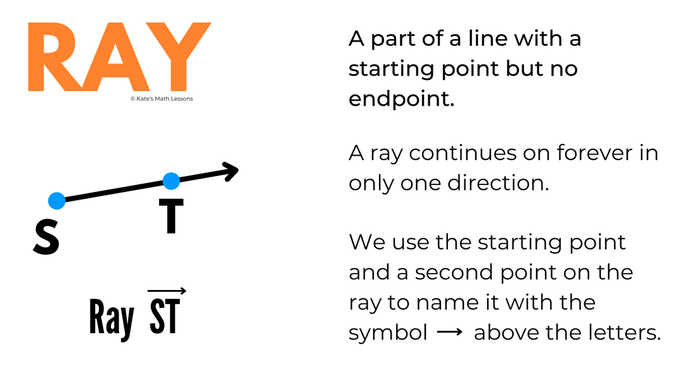 When you name a ray, make sure to write the starting point first.  In the example above, you need to write the letter S first to indicate that the ray starts at point S.  If you wrote the letter T first, that would be a different ray that starts at T and goes toward the point S.

What is an Angle? 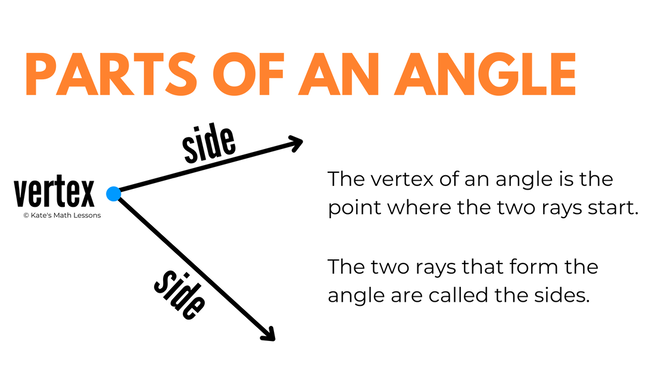 ​There's more than one way to name an angle.  One way is to use the angle symbol ∠ and then write just the vertex.  In the example below, you could write ∠R since R is the vertex where the two rays meet.

Another way to name an angle is to use three points on the angle: one from each ray and the vertex.  If there's more than one angle that shares the same vertex, using 3 points helps you to be more specific so people know which angle you're referring to.  When you use three points to name an angle, make sure to put the vertex as the letter in the middle.  You can start with either ray so the angle in the example below can be called ∠QRS or ∠SRQ. 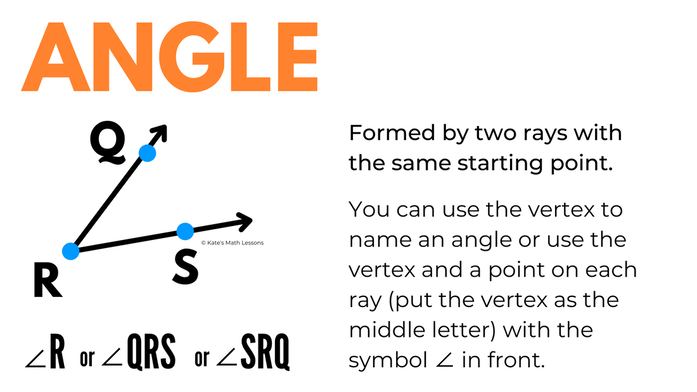 There are three different types of angles based on their angle measurement.  We measure angles in degrees.  For reference, a full circle is 360 degrees and a straight line is 180 degrees.

If the measure of an angle is less than 90 degrees, it's called an acute angle.   An easy way to remember acute angles is to picture a little baby angle and think "Aww, isn't that such a cute little angle!"

If the measure of an angle is exactly equal to 90 degrees, it's called a right angle.  This will often be marked in a diagram with a little square in the corner.

If the measure of an angle is greater than 90 degrees, it's called an obtuse angle. 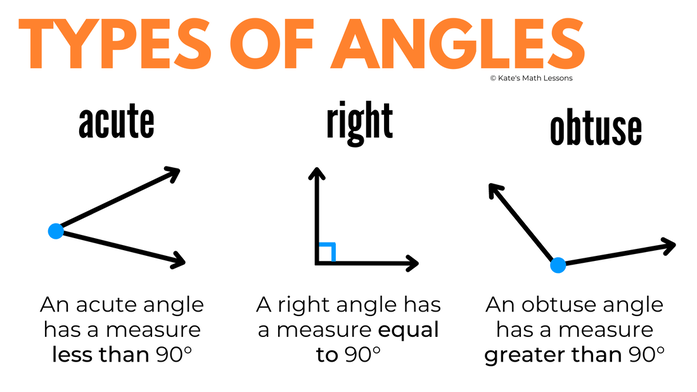 Pin this image to save this lesson for later! 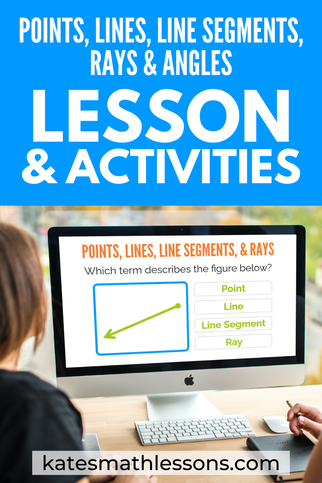