In this problem, we don't know either angle so it's not quite as simple as the first example.  In math, when we don't know the value of something we usually assign it a variable and try to see if we can set up an equation.  Let's call the smaller angle x.  We know that the larger angle is 5 times as big.  This means we can the larger angle is 5x.  We know that the two angles are complementary, so we can add them together and set it equal to 90 degrees.

The hardest part with word problems is usually setting them up.  Now that we have our equation, we just need to combine like terms and solve for x.  Remember, x represents the smaller angle.  We need to make sure we answer the question and find BOTH angles. 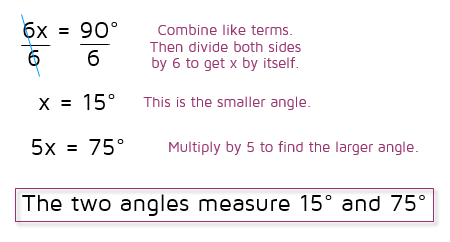 We know that supplementary angles always add up to 180 degrees.  This means we can set up and equation and solve it to find the missing angle. 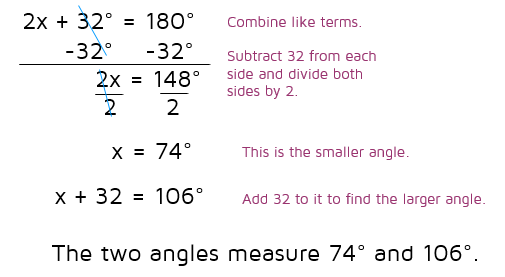 Ready to try some problems on your own? Click the START button below to take a practice quiz.
Want to try one of my digital math activities for free?  Click the link to grab the teacher version or student version.
Copyright © 2015 - 2021 Kate's Math Lessons