What is the Quadratic Formula?

The Quadratic Formula is a formula you can use to find the solutions of a quadratic equation that's written in standard notation.  In the formula, the a is the coefficient of the x-squared term.  The b is the coefficient of the x-term.  The c in the formula is the constant.  One way to read this formula aloud is to say "x equals the opposite of b, plus or minus the square root of b-squared minus 4ac, divided by 2a." 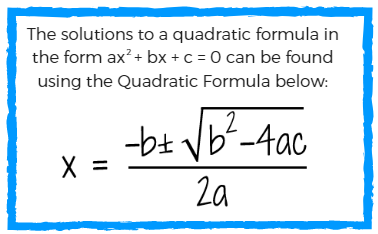 Pay attention to the -b in the numerator of the formula.  This is the opposite of b.  -b is the same as -1b.  When you multiply a number by -1, it changes the sign.  Always make sure to switch the sign of the b value when you plug it in the formula.

Also pay attention to the b-squared term under the square root.  If b is negative, b-squared will be positive because a negative times a negative equals a positive.

How Do You Use the Quadratic Formula?

Step 1: Make sure the quadratic equation is in Standard Form. Rearrange if necessary.
Step 2: Identify a, b, and c.  Pay close attention to plus and minus signs.
Step 3: Plug a, b, and c into the formula.
Step 4: Simplify.
a) First simplify the numerator and denominator.
b) Split into two answers. One with a + sign, one with a - sign.
c) Simplify the two numerators if possible.
d) Divide last.

Step 1:  We need to rewrite this equation in standard form before we can use the Quadratic Formula.  We can subtract 2x from both sides to get it set equal to 0.

Step 3: Now plug in the values for a, b, and c.  Make sure to switch the sign of b when you use the formula!

Step 4: Simplify.  The denominator is easy: 2(1) = 2.  In the numerator, start with the part under the square root.  -2 squared is a positive 4 (a negative times a negative is positive).

Next, we need to split this up into two separate answers.  The symbol between the 2 and the 8 is a plus or minus symbol.  This means we need to split it up and write one answer with a + sign and the other with a - sign. 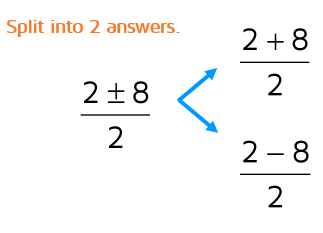 ​Step 1:  We need to rewrite this equation in standard form before we can use the Quadratic Formula.  We can subtract 9 from both sides to get it set equal to 0.

Step 3: Plug the values into the formula.  Don't forget to switch the sign of b.

​Want to see a different way to solve a quadratic equation?
Check out the completing the square lesson or the solving a quadratic by factoring lesson.
Want to try one of my digital math activities for free?  Click the link to grab the teacher version or student version.
Copyright © 2015 - 2021 Kate's Math Lessons