How to Find the Percent of a Number 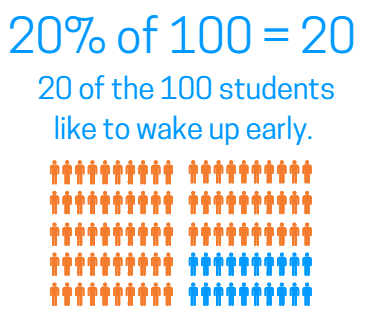 So what do you do if the total isn't out of 100?  What if only 50 students took the survey? How would you find 20% of 50?  It's not quite as simple as the two examples above, but you can still find the percent of a number even when the total isn't out of 100.  There's more than one way to do it.  We'll look at two different ways in this lesson and you can use whichever one seems easiest to you!

Using a Proportion to find
​the Percent of a Number

This means that 90% of 20 is equal to 18.  Another way to say this is if you get 18 out of 20 right on a quiz, you got 90% of the questions correct.  You can double check this by changing the fraction 18/20 to a decimal.  (Not sure how? Check out the lesson on converting between percents, decimals, and fractions)

Here are a few more examples to help you understand how to use a proportion to find a percent of a number:

The hardest part is setting up the proportion. Now we can cross-multiply to find the answer. Make sure to check out the lesson on solving proportions if you need help with this step.

Now you can cross-multiply to find the answer.


Now let's look at a different method that can be used to find the percent of a number.

Multiplying by a Decimal to Find the Percent of a Number

If we look back at how we solved the last few problems with the proportion method, we can start to see a pattern.  Did you notice that each time we multiplied the two numbers together and then divided by 100? 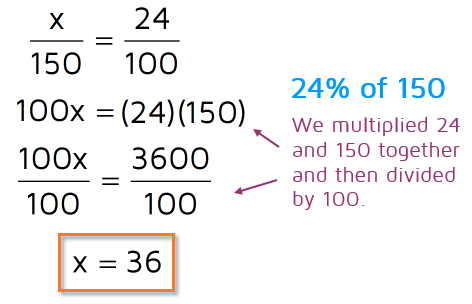 Another way to get the same answer is to divide by 100 first and then multiply the numbers together.  24/100 = .24  and (.24)(150) = 36.  This is the same answer we got by cross-multiplying.  Most people prefer this method to setting up a proportion because it's a little bit faster, but you can chose to find the percent of a number either way.  Both methods result in the same answer.

When you divide the percent by 100, you're just changing it to a decimal. Remember, dividing by 100 just moves the decimal over two places to the left.

Be extra careful when the percent is less than 10%! A common mistake on this problem is to accidentally write 8% as .8 instead of .08.  If you use .8 on accident, you would find 80%, not 8%. Always think about the reasonableness of your answer.  8% means 8 out of every 100. That's not very much so we should have expected a small number in comparison to a total of 250.

Now that you've seen two different ways to solve a proportion, it's up to you which method you would like to use. Both methods will result in the same answer.

Ready to try a few problems on your own? Click the START button below to take a practice quiz. 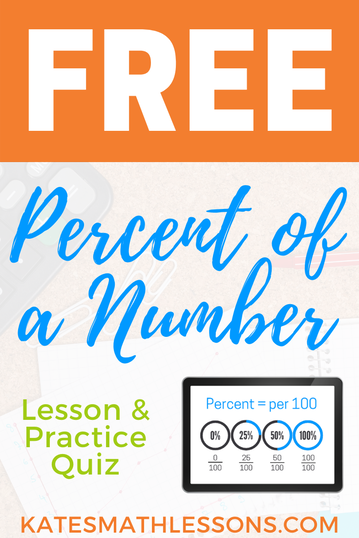