Logarithmic Equations with
​Logs on one side

Before we can rewrite this equation in exponential form, we need to get the logarithm by itself. We can do this by dividing both sides by 2. 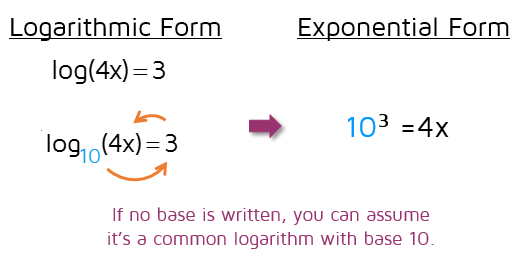 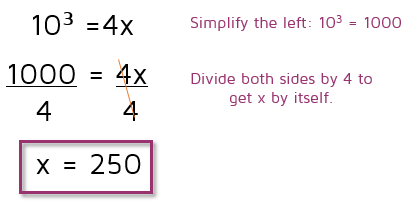 This equation is a little bit harder because it has two logarithms. Before we can rewrite it as an exponential equation, we need to combine the two logs into one.  We can do this using the difference of two logs rule. (Doesn't sound familiar? You might want to check out the lesson on logarithm rules before moving on.)

Here's the difference rule for logarithms:

Since we have two logarithms with the same base (they are both natural logs with base e), we can use the rule above to combine them into one logarithm.

Now that we've rewritten the equation so it has a logarithm by itself, we can rewrite it in exponential form.  Whenever you rewrite a logarithm, make sure to identify the base.  We have a natural log (remember, ln is a lowercase L for log and an n for natural).  This means the base is the irrational number e (e is approximately equal to 2.71828).  You can learn more about natural logs in the intro to logarithms lesson.

After the equation has been written in exponential form, it's relatively easy to solve for x.  If you want to leave it as an exact answer, just divide both sides by 6 and leave e in your answer.  If you want an approximate answer, you can do e to the 5th power on your calculator and then divide by 6.  If your calculator doesn't have an e button, you can use 2.71828 to approximate e.

Want to learn how to solve a different type of logarithmic equation?
Check out the lesson on solving logarithmic equations with logs on both sides.
Want to try one of my digital math activities for free?  Click the link to grab the teacher version or student version.
Copyright © 2015 - 2021 Kate's Math Lessons