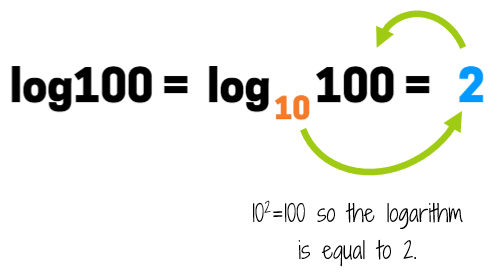 ​Another number that's commonly used as the base of a logarithm is the number e.  e is an irrational number that comes up so often that it gets it's own symbol (similar to how the number 3.14159. .  is called pi).  The constant e is named after the mathematician Leonhard Euler. It is approximately equal to 2.718.  When a logarithm has a base of e, it's called a natural logarithm.  This is abbreviated as ln  (that's a lowercase L. l for log, n for natural).

Ready to try answering some questions about logarithms on your own? Click the START button below to try some on your own!
Interested in learning more about logarithms? Check out the lessons on solving equations with logarithms, logarithm rules, or the change of base formula.