Integers are similar to whole numbers, but also include negative numbers.  There are an infinite number of integers, so it's impossible to list them all out for you but I've listed some below.  Integers do not include decimals or fractions.

Another way to describe the set of integers is to say they are the set of positive whole numbers, their opposites, and zero.

Want to learn more about integers and other types of numbers?  Check out my classifying real numbers lesson.
​

How Do You Compare Integers? 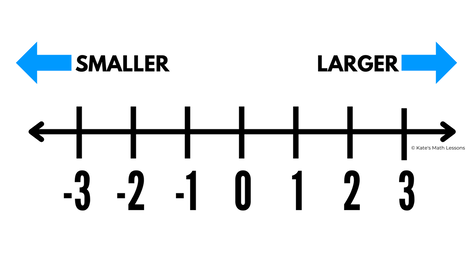 1) Write an inequality to compare the integers -7 and -3.

Rules to Compare and Order Integers

Students sometimes ask me "What are the rules to compare and order integers?"  My simple answer is that you shouldn't try to memorize rules for comparing or ordering integers.  Instead of trying to remember a list of rules, it's much easier to draw a quick number line to help you compare and order positive and negative integers.

The more you use a number line, the more you'll notice some of the patterns or "rules" that are below.  Don't try to memorize these, instead read them and make sure they make sense to you based on how a number line works.

Any time you're comparing integers with different signs, the positive one will always be the largest.  For example, if you're comparing -8 and 3, we automatically know -8 < 3 because -8 is negative and 3 is positive.

Again, don't try to memorize this rule.  This is hopefully something you'll start to notice on your own the more you practice comparing integers.

How to Order Integers

Sometimes you'll be given a list of several integers and you'll be asked to write them in order from least to greatest (or maybe greatest to least).

To put integers in order, it also can help to see where they all are on a number line.  Then you'll want to write them in order from left to right if you're asked to put them in ascending order from least to greatest.

If you're asked to write them the other way around (in descending order from greatest to least), you'll list them in order from right to left.  Pay careful attention to which order the question gives you!

To put these integers in order, we can plot them on a number line to help us.

The question asked us to order them from least to greatest.  This means we need to list the smallest integer first.  To list integers in ascending order (from least to greatest), start on the left side of the number line and list them in order from left to right.  -7 is the farthest to the left, so it's the smallest.  As we move from left to right, we get to -4 next, then 0, and 2 is the greatest.

One way to write your answer is to just list the numbers in order from smallest to largest.

Another way to write this is to use inequality signs to indicate that they're written from least to greatest.

2) Write the numbers  2, -1, -5 and 4 from greatest to least.
To find the answer, it will help if we plot the integers on a number line.  In this question, we need to put them in order from largest to smallest, so this time we'll start on the right side of the number line and work our way to the left side.

Need some extra practice to help you or your students order and compare integers with and without a number line?
Don't miss these digital, self-grading activities:
Comparing and Ordering Integers Boom Cards (digital task cards)
Compare and Order Integers Digital Activity for Google

Pin the image below so you'll remember this math lesson later. 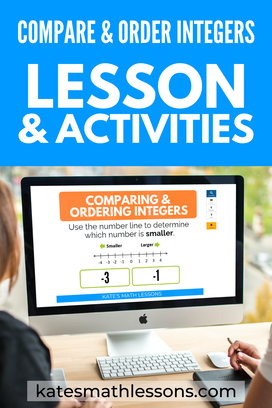