Please note that this lesson includes irrational numbers.  If you're looking for a simpler lesson, make sure to check out my Classifying Rational Numbers lesson that includes whole numbers, integers, and rational numbers.

1, 2, 3 . . . .
Natural numbers start at 1 and go up from there.  They're also sometimes referred to as counting numbers because we start at 1 when we learn to count.  The natural numbers do not include zero, negative numbers, decimals or fractions.  These are likely the first type of numbers that you learned about as a small child.

Bonus Note: Did you know people had a really hard time accepting 0 as a number?  They used to think it was crazy to have a number represent "nothing."  I hope you're glad it was invented, because we wouldn't have computers without the number 0!   Check out this history of the number zero to learn more interesting facts about 0 (did you know some thought it was evil?).

Numbers that can be written as a fraction.

Any number that can be expressed as a fraction is considered to be a rational number.  I would list them out for you, but that's impossible because there are so many!  All of the integers are also rational numbers because you can rewrite any of them as a fraction using a 1 in the denominator (for example, 5 can be rewritten as the fraction 5/1).  Rational numbers also include terminating decimals (decimals that stop at some point), repeating decimals (like .2323.  . . ), and numbers that are already written as fractions.

NOT Rational Numbers:
A decimal that goes on forever without ending or repeating is not rational.  Here are two examples:

Numbers that cannot be written as a simple fraction.

Note of caution:  Not all square roots are irrational!  For example, the square root of 64 is 8 (which is rational).  You may need to simplify an expression first in order to determine the type of number. 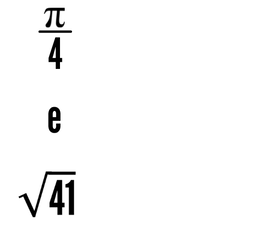 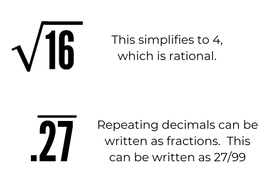 The set of all rational and irrational numbers.

So are all numbers real numbers?  Nope.  But most of the numbers you're familiar with are real numbers.

Remember that people used to think the idea of 0 as a number was crazy?  That's probably how you'll feel when I tell you there are numbers that are called imaginary numbers.  The name imaginary is pretty unfortunate since it gives people the impression that they're just pretend numbers, but they do exist and are useful in things like electrical engineering and quantum physics (it's pretty complex stuff so you may not learn about them until an upper level math course).  Check out this Imaginary Numbers lesson if you want to learn more!

​Let's say you have to classify the following numbers:

When I classify numbers, I start on the rational side in the innermost section and work my way out.

Let's look at -5 first.  Is it a natural number?  No, natural numbers don't include negative numbers.  Is -5 a whole number?  No, whole numbers don't include negative numbers either.  Is it an integer?  Yes, integers include -1, -2, -3, etc. so -5 is an integer.  -5 is also a rational number since it can be written as the fraction -5/1, but the term integer is more specific.

What about 8?  If we start in the innermost section, we can see that 8 is a natural number (or counting number).  This means that 8 is also a whole number, and an integer, and a rational number.

Last, we'll look at the .2222. . .  (the little bar over the 2 means it repeats).  Decimals are not included in natural numbers, whole numbers, or integers.  But repeating decimals can be written as a fraction (in this case it can be written as 2/9), which means .2222. . .  is a rational number.
Want to try one of my digital math activities for free?  Click the link to grab the teacher version or student version.
Copyright © 2015 - 2021 Kate's Math Lessons