The number system that we use today has different types of numbers.  In this lesson, we'll look at 3 types: whole numbers, integers, and rational numbers.  ​

Bonus Note: Did you know people had a really hard time accepting 0 as a number?  They used to think it was crazy to have a number represent "nothing."  I hope you're glad it was invented, because we wouldn't have computers without the number 0!   Check out this history of the number zero to learn more interesting facts about 0 (did you know some thought it was evil?).

Numbers that can be written as a fraction.

NOT Rational Numbers:
A decimal that goes on forever without ending or repeating is not rational.  Here are two examples:

Looking to learn about more types of numbers?  Learn about natural numbers and irrational numbers in my Classifying Real Numbers lesson. 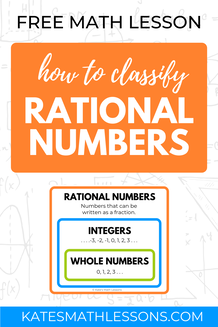