Solving Equations with Variables on Both Sides

Once you have your answer, it's a good idea to check it to make sure it's correct.  To check our answer, we can just plug in 4 for x in the original equation and make sure it comes out to 19. 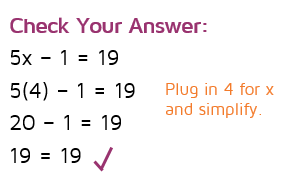 Solving Equations with Variables
​on Both Sides

Sometimes you'll get an equation that's a little more complicated than the one above.  If you're in an algebra class, you'll likely run into an equation like this:

What's the big difference between this equation and the one we solved earlier?  This equation has variables on both sides of the equals signs. Remember, you can visualize an equation using a balance scale.  We could use the picture below to represent the equation: 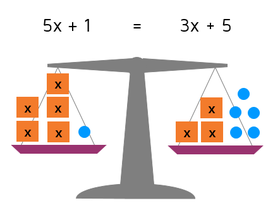 On the left, there are 5 boxes with x in them.  On the right, there are 3 boxes with x in them.  Remember, if we do anything to the equation we have to make sure that we do the same thing to both sides to keep it balanced.  Even though we don't know what x is, we know that each box containing x weighs the same amount.  If we take 3 of the boxes off each side, it will still be balanced because each box weighs the same. 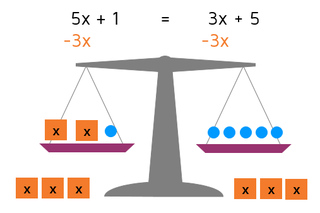 ​In this equation, you can move all the variables to the left side of the equals sign by subtracting 3x from both sides.

​Open the next page to see what to do next.