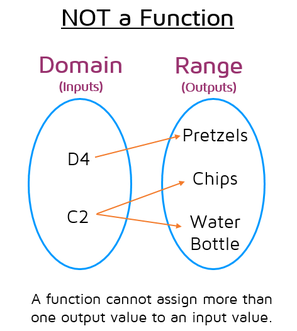 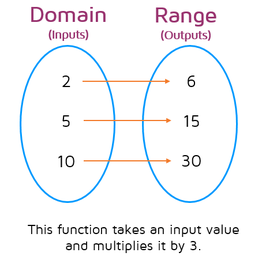 You can also use tables to represent functions.  Instead of using two ovals with circles, a table organizes the input and output values with columns.  The input/domain values go first on the left as the x-values and the corresponding output/range values are listed second in the next column as the y-values.

Remember, a function can only assign an input value to one output value.  If you see the same x-value with more than one y-value, the table does not represent a function.

​
​We can use the same mapping diagram from earlier to represent the function with ordered pairs instead. The function can be written as a set of ordered pairs (notice the curly set brackets on the outside). Make sure to put the input values first as the x-coordinates and the corresponding output values second as the y-coordinates.

Remember, a function can only assign an input value to one output value.  If you see an x-value repeated in the set and it's been matched with a different y-value, it's not a function. 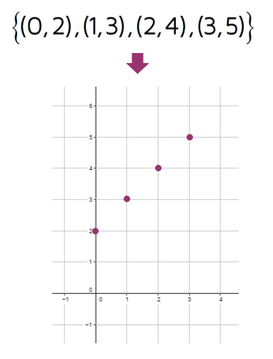 ​On a graph, a function could be just a set of ordered pairs or it can also be represented as a continuous line.  For example, the line y = 2x is a function, it takes an input value and multiplies it by 2 to get the output value.  The graph of a function doesn't have to be a straight line, a function can also be a curve. 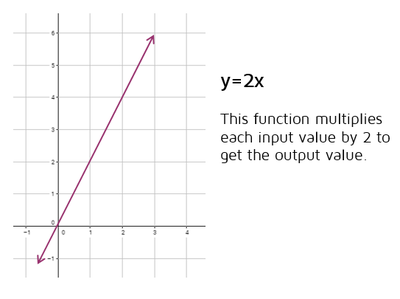 Want to see some more examples? Check out the short video on functions below.

Want to learn more about functions? Make sure to check out the lessons on function notation ​and the Vertical Line Test.
Want to try one of my digital math activities for free?  Click the link to grab the teacher version or student version.
Copyright © 2015 - 2021 Kate's Math Lessons