​Remember, f(x) = 2x is the exact same thing as y = 2x.  Function notation just allows us to name a function (so we can know if we're talking about function f, function g, function h, etc.) and it gives us information about the input values (the x inside the parentheses tells us that we'll plug the input values in for x).

In the examples above, we used the letters f, g, and h to name the three different functions.  These are the most common letters used to name functions, but really about any letter can be used to name a function.  Notice that all three examples use the variable x as the input variable.  While x is probably the most common variable you'll use in algebra, it doesn't always have to be x.  If you look at the table below, you can see several different ways to write the same function using different variables. 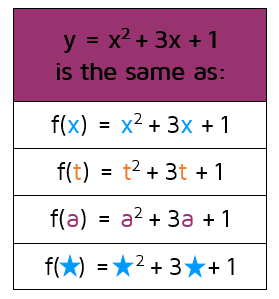