The number that is being added each time to get to the next term is called the common difference.  This is the constant difference you get between each set of consecutive terms. We use the letter d to indicate this value.

If you're asked to find the common difference of an arithmetic sequence, that means you need to figure out the number that's being added each time to get to the next term of the sequence.  Don't forget that the common difference d will be a positive number if your terms are getting larger and d will be a negative number if your terms are decreasing.

If you're not sure what number is being added or subtracted, you can always pick any two consecutive terms and subtract them to figure out the common difference.

Important Note: If you're not sure the sequence is arithmetic, you'll want to double check to make sure the difference between each set of consecutive terms is the same.  If the number that's being added isn't the same number each time, it's not an arithmetic sequence.

You can use a subscript to indicate a term number.  For sequences, we usually use the letter a and then write a small number down and to the right to indicate which term it is.  For example, let's say you see an a and then a small 4 written after it.  The small 4 indicates that it's the 4th term of the sequence.

Each term of a sequence can be labeled using subscripts.  Here's an example of how you could label the first 5 terms of a sequence:

​The "nth" Term of an Arithmetic Sequence

Sometimes you'll see the letter a and then a small subscript n written after it.  This is called the "nth" term.  It's a generic term and can represent any term in the sequence by just plugging in a value for n.

When sequences form patterns, it can be helpful to develop a formula that can be used for finding other terms in the sequence.  Open the next tab to learn more.

Let's go through this formula piece by piece.  The top line says a sub 1 is equal to 8.  The small subscript 1 means it's the 1st term of the sequence.  So the top line is just telling us how to start out the sequence.

The second line starts out with a sub n.  Remember, this represents the "nth" term of the sequence is just a generic term.  It's basically saying, "to find any term you want in the sequence, you  _____."  A recursive formula gives you the steps to take to find the next term in the sequence. 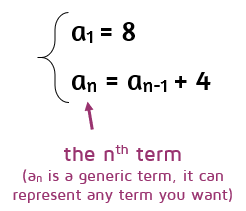 We know the first term of this sequence is 8.  If we want to find the 2nd term, we need to plug in 2 for n (in both spots). This simplifies to the 1st term plus 4.

Did you notice a pattern? To find a term of the sequence, you add 4 to the previous term.  If you repeat this process over and over, you generate the sequence. 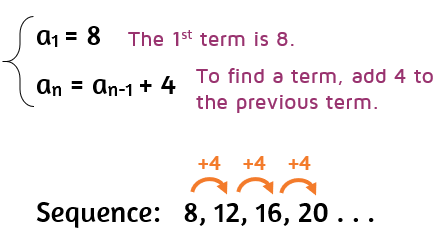 Use the recursive formula below to find the first 4 terms of the sequence.

Let's say you are asked to find the 30th term of a sequence.  If you have the recursive formula, you have to start with the first term and find term after term until you get to the 30th one. What a pain!  Thankfully there are also explicit formulas for sequences.  An explicit formula is a formula where you can find any term you want without needing to know the previous terms. Here's an example: 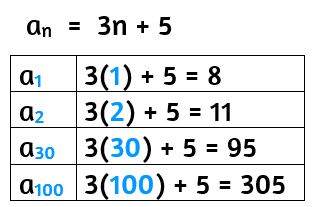 Find the 50th term of the sequence given below.

If this had been a recursive formula, you would have to use the formula over and over until you found the 50th term.  With an explicit formula, you just plug in the value for n that you want.  In this case, we want the 50th term so we plug in 50 for n and simplify.

If you have a sequence with a pattern, you'll often be asked to find a certain term later on in the sequence. If you have an explicit formula for the sequence, you just plug in the value for n that you need.  But sometimes they don't give you a formula.  For example, your teacher may give you the sequence 5, 7, 9, 11 . . .  and ask you to find the 20th term or the 100th term.

Listing the first 20 terms wasn't too bad, but it will take a long time to list the first 100 terms.  Thankfully, there's a faster way! There is a formula that you can use to find a specific term of an arithmetic sequence. 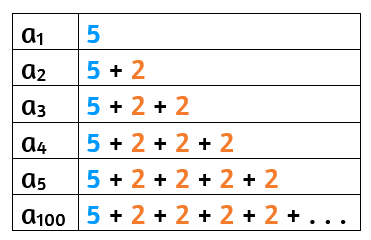 ​Writing an Explicit Formula
​for an Arithmetic Sequence

You can use the pattern we looked at above to write an explicit formula for an arithmetic sequence. The general formula is below:

If you're given the first few terms of an arithmetic sequence, you just need to identify the first term and the common difference (the number being added each time).  Once you plug these values in, you have an explicit formula that you can use to find any term you want. 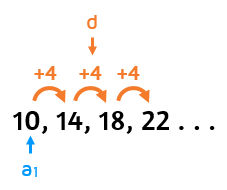 Now all that's left to do is plug in 10 for the first term and 4 for d.  Distribute the 4 and simplify to get the explicit formula for this sequence.

Now that we have the explicit formula, we can find the 200th term by plugging in 200 for n.

Ready to try a few problems on your own? Click the START button below to take a practice quiz.
Want to try one of my digital math activities for free?  Click the link to grab the teacher version or student version.
Copyright © 2015 - 2021 Kate's Math Lessons