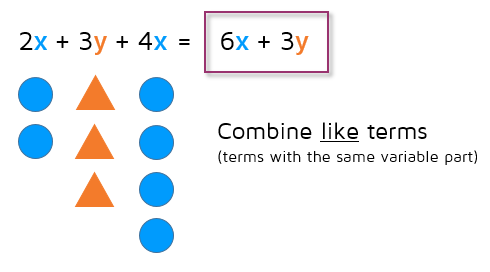 Here's one more example with shapes to help you visualize it.  Remember, you only add or subtract the coefficients of like terms. The variable part always stays the same when you're adding or subtracting. 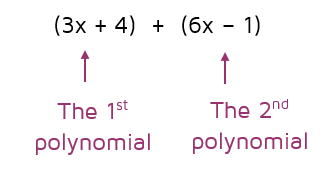 To make this look a little simpler, we can rewrite it without parentheses.  Notice that there isn't a number written outside of the parentheses.  If we wanted to, we could put a 1 on the outside of each one.  If we distribute the 1, nothing happens!  When you're adding two polynomials, you can remove the parentheses and nothing will change.

When you're adding regular numbers like 3 + 2, you can write the addition vertically or horizontally.  You get the same answer either way.  When polynomials are added vertically, you can just add straight down if the terms are lined up in order.

You can rewrite the problem horizontally if you prefer.  You get the same answer either way.

Be extra careful when subtracting polynomials.  If you want to get rid of the parentheses, you need to distribute a negative 1 to the second polynomial.

The first polynomial will stay the same because nothing happens when you multiply by a positive 1.  When you distribute the negative 1 to the second polynomial, it will change the sign of each term.
​

Be extra careful when subtracting polynomials vertically.  You can subtract straight down if the like terms are lined up.  However, students tend to make more mistakes when subtracting as opposed to adding, especially if negative numbers are involved.  Our advice is to distribute a negative 1 to the bottom polynomial and then add the terms instead.

Let's say you've been given this subtraction problem:

You could subtract straight down since the like terms are lined up. If you choose to do this, be very careful to subtract at each step.  A common error is to subtract for the first set of like terms and then to accidentally switch to adding for the rest of the problem.  An easy way to avoid this is to distribute a negative 1 to the bottom polynomial first to switch it to an addition problem.  You don't have to do this step, but most students find it easier to add instead of subtract.

Now that it's been rewritten as an addition problem, we can add all the like terms together in each column. 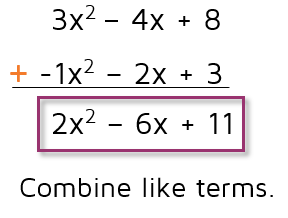 You can also rewrite the problem horizontally if you want to.  You can see below that you get the same answer.

It does not matter whether you choose to write the problem vertically or horizontally.  Pick the method that seems easiest to you.  Make sure to be extra careful when subtracting polynomials - pay close attention to positive and negative signs.